Since 1933, we have continuously managed to move together
with our customers and strengthened our position in a constantly
changing market. But we haven’t done it on our own. KMC’s
potato starch factories, AKD and AKK, play an indispensable
role in KMC’s sustainable development.

Over the years, the two potato starch factories AKK and AKD have worked to extract all the valuable ingredients of the humble potato. It is an important part of our work to extract as much as we can
from potatoes with the lowest possible resource consumption and the smallest possible carbon footprint.

When the factories were established almost 100 years ago, the goal was to produce a single product: potato starch. A potato contains about 20% starch, so once the starch had been extracted, you were
left with 80% of a raw material that could not be used. The remaining 80% was therefore primarily considered a waste product that needed to be disposed of as easily and cheaply as possible.

Today, there is virtually no waste from the 1,400,000 tons of potatoes we process every year. Every ounce of the raw material is transformed into good and marketable products, and this development
is a success story for both the climate, the environment, and the company’s finances. 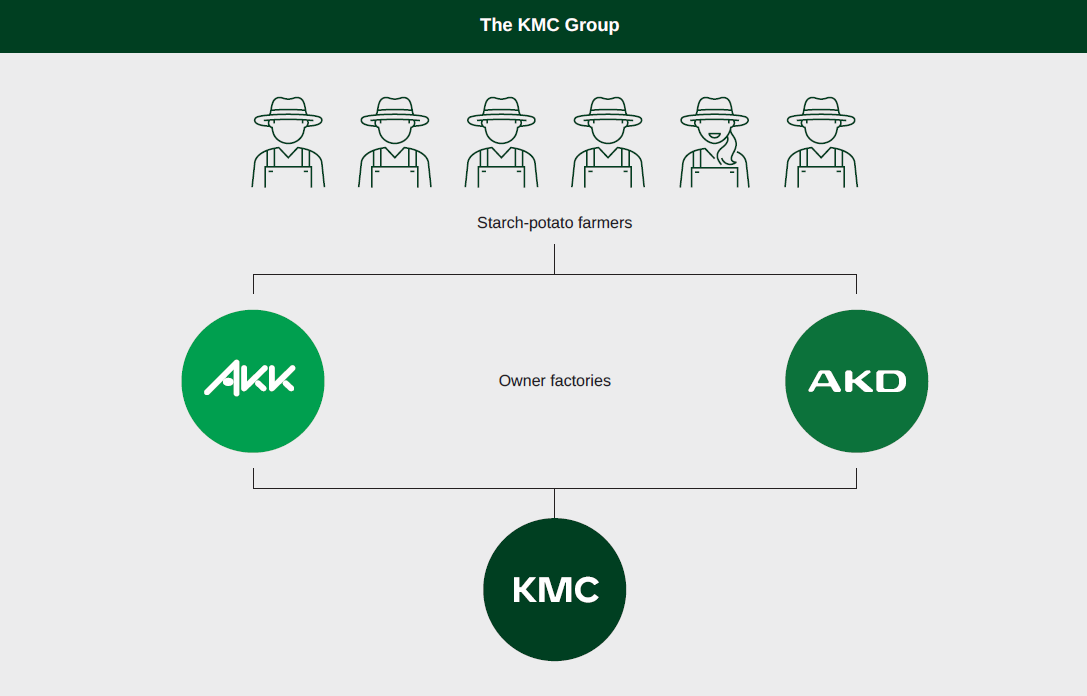 Full utilization of the potato’s qualities
The 20% of potato starch is still our primary product. It is used either directly or in processed form for food production all over the world. Potato starch is a pure plant-based ingredient that has countless uses. Often, plant-based potato starch is used to replace animal products such as milk and eggs, and is making a significant contribution to the transition to a more plant-based diet.

In addition to potato starch, we have also identified several other applications over the years. Approx. 75% of the potato is fruit juice, comparable to the juice in an orange. Potato fruit juice is rich in nutrients, and at our factories we concentrate the juice into a product called protamylasse. Protamylasse has two applications: for biogas production, and also as a very popular agricultural fertilizer which is sold back to potato growers. Thus, the circular and sustainable use of the concentrated fruit juice provides nutrients from this year’s harvest for next year’s crops.

Whether the protamylasse is used as a fertilizer on the fields or for biogas production, there are clear energy benefits. Biogas is a clean and fossil-free energy source, and when recycled as agricultural fertilizer, protamylasse replaces conventional energyintensive artificial fertilizer with a sustainable alternative.

During the concentration of the fruit juice into protamylasse, another product is created. We call this condensate, and it is basically the water from the fruit juice. The condensate is used for field irrigation, and in this way another part of the potato is also returned to its original cycle.

We call the product potato pulp, and it is used in the following three ways:

1. First, we can further refine the pulp by isolating the dietary fiber into a product that can contribute important dietary fibers and a better structure to foods.

2. Next, potato pulp is a popular animal feed for cattle, for example, where it stimulates both milk yields and fat content.

3. Finally, potato pulp is also an efficient raw material in biogas production. If all the potato pulp from AKK and AKD was used to produce biogas, volumes would exceed the amount of gas consumed by the factories themselves.

The value of a long, sustainable tradition
For AKK and AKD, the increased focus on sustainability is by no means a new idea entailing only inconvenience and increased costs. We are very fortunate in that there is a strong correlation
between the desire to produce sustainably and the factories’ longterm financial interests.

We have a long tradition of working passionately to lower our energy and water consumption and to recycle as much of the energy and water as possible. Within the past 10 years, investments in modern production technology and ongoing optimizations have, for example, reduced our CO2e emissions by up to 70% per produced unit. But we are not stopping there. The potato has probably not revealed all its secrets to us yet, and therefore we believe that the little tubers hold even greater potential, and that we will be able to conjure up even more exciting products from it in new and sustainable ways.

The potato is one of the world’s most versatile, climate-friendly, and sustainable crops. At AKK and AKD, we are continuing our efforts to make starch potatoes and our products even more sustainable, and thus contribute further to KMC’s circular business model.

Want to know more about our sustainable goals and ambitions?

See all news here
30. January 2023 KMC building  new innovation center to benefit customers worldwide KMC has just received planning permission to build a new 5,000-square-meter innovation center in...
24. January 2023 Taking cheese to a plant-based level When you think of cheese, potato starch is probably not the first ingredient to cross your mind....
19. January 2023 More potato protein in feed for danish agriculture To reduce the use of imported feed protein, KMC aims to supply 10,000 tons of potato protein to...